I've been putting off writing this post for a while. I haven't been able to stitch on The Astronomer for ages now. Nearly 3 months. I cant bring myself to pick it up.

I have recently been diagnosed with OCD. I am trying different medications but will not be trying CBT therapy as it is not something that has worked well for me in the past.

Stitching became such a mammoth task due to rituals and compulsions i had to follow before i could even sit down to stitch. Constant checking of symbols and placement of stitches became overwhelming. The smallest mistake would end in tears. I started washing my hands till they bled in case dirt or oil got on to my work.

Im done for a while. I WILL stitch in the future but for now i need to get my meds mix right and concentrate on getting better. I want stitching to be relaxing again and fun. not how it has been for the last few months.


So for now have some pics!

Esmai recently broke her nose while riding her bike. She went straight into a lamppost. The very next day she was back on her bike. Shes fearless! The lamppost was replaced a week later as she had dented it. She will be 4 next month! 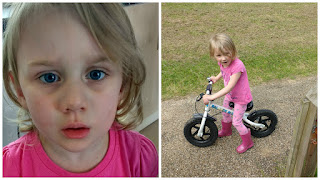 Connor is doing amazing! He can now ride his bike without stabilizers and is learning to ride one handed. He is still enjoying being Home Educated. He is doing very well at beavers and has earnt a lot of badges. He recently had his first sleep over with the beavers and enjoyed every second.  Connor has just turned 8!! 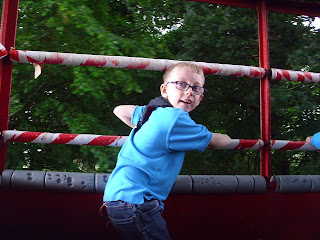 I have lost a tonne of weight- well not a tonne. 8 stone since last January. All thanks to a stomach ulcer. Im enjoying the slimmer version of me. I still Hate clothes shopping with a passion though! 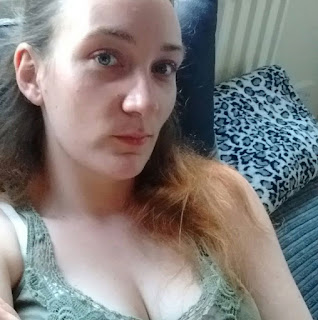 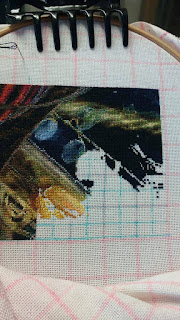 *Thank you for all your kind words about Smokey. He is still very much missed.*
Posted by Amber at 10:27 2 comments:

Email ThisBlogThis!Share to TwitterShare to FacebookShare to Pinterest
Labels: The Astronomer

Progress on The Astronomer and Some Sad news

I have progress!! I have only managed to stitch for one night recently,as life has got pretty busy.
But i feel i have accomplished a good amount. Some of the Milkyway? has been filled in. I managed a ton of black and can now make out another glass discy thing. (Technical right?) The small unfilled black area is the Crow!!

Im not sure if im going to get a chance to work on this again this month. I am learning to drive and have a intense week of lessons starting this Monday. After that i will go back to doing weekend lessons so hopefully by the start of April i will be able to get a few hours in a night. I had my theory test today and failed on the Hazard perception part of it. 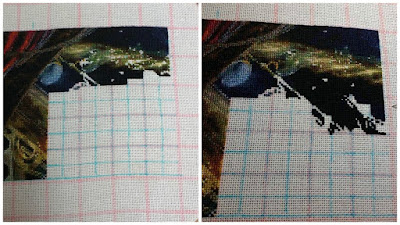 Last week one of our cats passed away. We had to put him down after he became poorly a few weeks ago. The children have taken it very hard. He was very cuddly and because we dont know completely why he was poorly they are struggling to understand. My partner rescued him 3 years ago driving 3 hrs to pick him up. 10pm at night from a lady on Facebook. Not getting home till 1am. He was very poorly looked after. Fleas, Ticks and a birth defect in his jaw. His teeth was rotten and he was under weight. He slowly came to feel at home with us. Over the last year he has started cuddling anyone he could. Generally the children or guests. Covering them in cat fur haha. He was the worst cat possible. Unable to jump fences, balance, running into windows. Ect. He once set himself on fire-TWICE-in the same night! He is going to be missed. 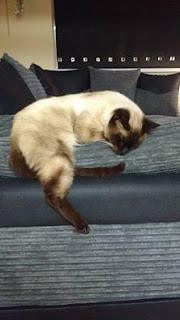 2 Months since my last update. I had hoped to get so much more done.
For Xmas i got a new floor stand with a rolling frame, i was so excited about this but haven't been able to get on with it. The frame is not keeping my tension tight enough so i have gone back to using my hoop. I think this is part of the reason i have stitched as much as i had hoped. That and i have restarted my driving lessons and am studying for my theory.

So this is how far i have got. I am loving the colors and slowly working which parts i can make out. Its nice to have a bit more color in this page. I am  really looking forward to doing more of the telescope, but it looks like confetti hell! 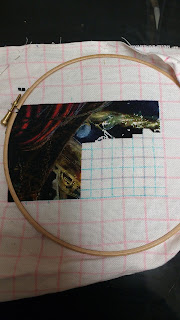 I finally have a page finish!! Admittedly a few days ago, but I posted on the HAED Facebook group, so I get points for that right? 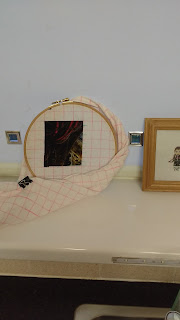 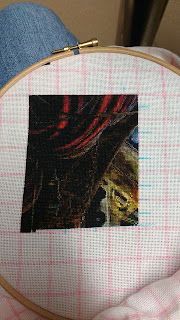 Email ThisBlogThis!Share to TwitterShare to FacebookShare to Pinterest
Labels: The Astronomer

I have finally started!!
Just under 400 stitches 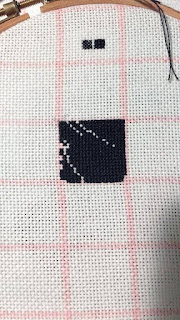 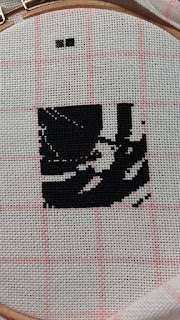 Im actually quite liking the magic grid fabric. Its taking some getting used to as its in blocks of 20X20 and i have only worked in blocks of 10X10, but if i continue to confuse myself i might get a fabric pen and spilt the grid up, ill see how i go.

I have started adding colour to this section as after working only in black on Tribal Dragon i have just about had enough of black.

I decided to start at the top left corner to save my fabric getting too dirty.
Posted by Amber at 14:38 3 comments:

Email ThisBlogThis!Share to TwitterShare to FacebookShare to Pinterest
Labels: Pictures, The Astronomer 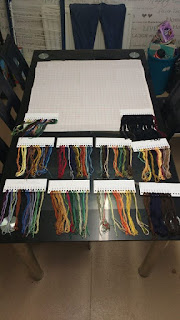 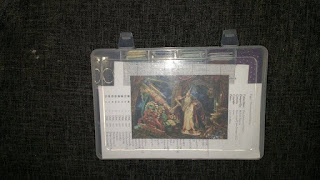 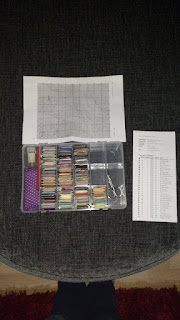 The Astronomer by Myles Pinkney

Amber
A place for my love of family life and cross stitch and -I am 29. I have EDS type 3 I am registered disabled. I have a son who is 8 years old and has lots of his own health problems,and a almost 4yr old daughter. I have an amazing partner. For more information on EDS please visit: http://www.ehlers-danlos.org/